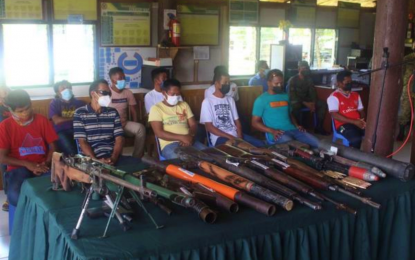 CAMP SIONGCO, Maguindanao: Thirteen combatants of the extremist Bangsamoro Islamic Freedom Fighters (BIFF), with six identified as bomb experts, surrendered at the Army’s 601st Brigade (601Bde) headquarters in Tacurong City, Sultan Kudarat on Friday, for the opportunity to be with their families again.

“We are tired of fighting. It is a futile cause to fight the government,” Kanakan, one of the surrenderers, said in the vernacular over a phone patch interview by reporters here Saturday.

“The path of peace is better than fighting a lost cause,” Uy said.

Records of the 6ID showed at least 100 BIFF gunmen have surrendered to the military in Maguindanao and Sultan Kudarat provinces in the past 15 months.