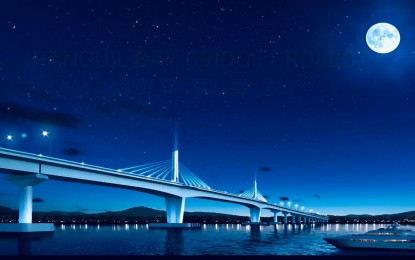 CAGAYAN DE ORO CITY: The National Economic and Development Authority in Northern Mindanao (NEDA-10) on Friday assured that the PHP7.3-billion Panguil Bay Bridge project will be completed by 2023, regardless of the change in government administration.

NEDA-10 director Mylah Faye Aurora Cariño, in an online briefing, said the project is funded under official development plans, which means it is part of the national project with contracts signed between government agencies and infrastructure contractors that need to be fulfilled.

The two provinces, she said, would ensure that the project will not be delayed.

Of the PHP7.37 billion total project cost, PHP2.16 billion was financed by the national government while PHP5.21 billion is a loan agreement between the Philippine government and Korean Export-Import Bank (Korea Eximbank).

Data from the Department of Public Works and Highways (DPWH) showed that as of March 2021, the preparation for the bored pile works at Tangub and Tubod side, earthworks, and embankment on the access road and approach road are already ongoing.

DPWH Secretary Mark Villar earlier said the bridge would soon become the longest bridge in the Philippines at 3.16 km., which would surpass the 2.16-km. San Juanico Bridge that connects Samar and Leyte provinces in the Eastern Visayas region.

Although the Covid-19 pandemic restriction on the movement of people and goods has affected the bridge construction, Villar said the contractor can now go full blast with the delivery of equipment and materials for its foundation works.