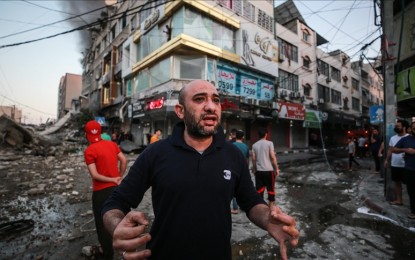 GAZA CITY, Palestine: The death toll from Israeli airstrikes in Gaza climbed to 67 Thursday, including 17 children and six women, with 388 injured.

According to a statement by the Palestinian Ministry of Health, two Palestinians were killed in Israel’s recent attacks on the region, including a child.

Heavy damage has also been recorded across Gaza’s residential areas, including the leveling of multistory buildings.

To date, six Israelis have been killed in the recent violence – five of them in rocket attacks in addition to a soldier killed when an anti-tank guided missile struck his jeep.

Israel occupied East Jerusalem during the 1967 Arab-Israeli war and annexed the city in its entirety in 1980 in a move that has never been recognized by the international community.