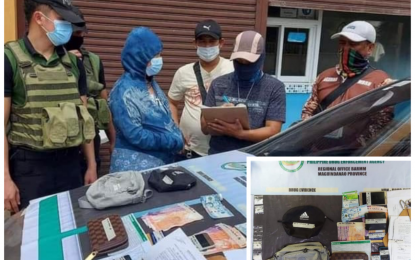 COTABATO CITY: Anti-narcotics agents arrested a female drug suspect and seized some PHP136,000 worth of shabu during a buy-bust here Thursday.

In a statement, Director Juvenal Azurin of the Philippine Drug Enforcement Agency – Bangsamoro Autonomous Region in Muslim Mindanao, identified the suspect as Joan Alon Abdullah, 30, of Calle 4, Barangay Rosary Height Mother.
“The suspect has long been on our watchlist,” Azurin said, adding that they have been trying to entrap Abdullah since 2015 until they managed to strike a deal with her through their poseur-buyer.

PDEA agents handcuffed Abdullah after handing out the suspected shabu to a poseur-buyer around 10 a.m. near her home.

Seized from her were eight packets of suspected shabu, three mobile phones, a wallet filled with various identification cards, PHP1,500 cash, a Honda Accord vehicle, and the PHP20,000 boodle money.

She will be charged with the violation of Republic Act 9165 or the Comprehensive Dangerous Drugs Act of 2002.