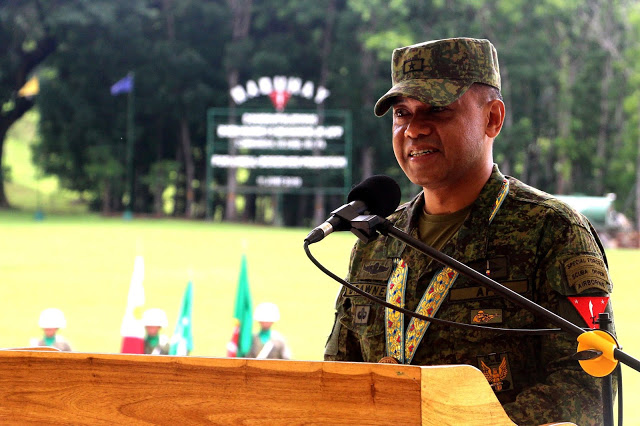 MARAWI CITY: The 1st Infantry Division of the Philippine Army tendered arrival honors to the newly promoted General at Kuta Major Cesar L Sang-an, Pulacan, Labangan, Zamboanga del Sur on Tuesday.
Brigadier General Romeo S. Brawner Jr., the 103rd Infantry Brigade Commander, based in Kampo Ranao, here, was accorded with a company-sized military honors as an accolade for his invaluable service as a Tabak Trooper.
“I thanked the 1ID for the honors tendered to me and I owe this promotion to our dear Lord and to many people who helped me in my career,” said Brawner in his speech.

Brawner is a member of PMA “Makatao” Class of 1989 where he graduated Nr 2 and the baron (Corps Commander) of his class.
He served and held various positions in different units and offices in the Armed Force of the Philippines, significant of which was being the Chief of Staff, 6th Infantry Division; Spokesperson and at the same time Deputy Commander of the Joint Task Force Ranao, that remarkably helped liberate Marawi from Maute terrorists.
Brawner excelled significantly in his military career, specialization courses and trainings such as Special Forces Operation Course, (where he ranked number one), Infantry Officer Basic Course (where he ranked 2nd), AFP Comptrollership Basic Course (ranked number one), and Intel Officer Course where he also ranked number one.
He also finished Neuro-Linguistic Programming, Emotional Intel at Work Forum, Unified CMO Coordinating Workshop, Jump Master Course, Advance Security Cooperation, Master of Strategic Studies, United Nation Peacekeeping Force, Support to Counter Terrorism, and Senior Service College & Joint Professional Education at the United States Army War College. (With a story from Tabak-DPAO)