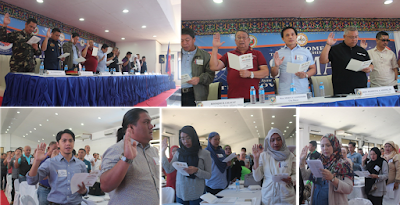 Government officials from both the national agencies and the local government units, the military and the police jointly launched the Lanao del Sur provincial Masa Masid (MAMAMAYANG AYAW SA ANOMALYA, MAMAMAYANG AYAW SA ILIGAL DROGA) program on April 10, 2017 held at the provincial capitol complex in the Islamic City of Marawi.

ROOSQUE B. CALACAT, assistant secretary for barangay affairs and community development of the Department of Interior and Local Governments (DILG), graced the occasion.

Calacat revealed a staggering 93 percent who are infected by the illegal drug, or 42,036 in the barangay involved — 1.3 million surrendered; 10% of that are dependent while 90% are from dysfunctional families

Calalcat said the program of Masa Masid was to supply the action and educational advocacy seminar etc. in order to give back life to the drug affected.

Participating leaders of multi-sectors took turns in expressing their commitment of support.

Bedjoria Soraya A. Adiong, LANO DEL Sur provincial governor was supposed to be the keynote speaker of the occasion.

She was however represented by his son, Mamintal Alonto Adiong, Jr., provincial vice governor.