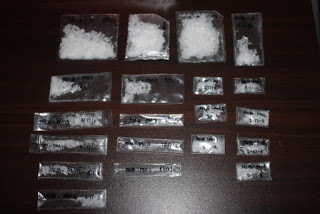 Authorities also confiscated 12 undocumented motorbikes, some were “chopped-chopped” and believed to be carnapped.

”The 4 a.m. raid surprised the suspects. Some tried but failed to escape as the safe house has been surrounded by police operatives,” he said.

“I want to commend our law enforcers for this very successful operations against these people who continuously destroy our society,” the mayor said.

Guzman said the group belonged to a well-organized carnapping and illegal drug syndicate operating in North Cotabato and nearby Maguindanao.

Purok Krislam is a known drug haven in Kabacan town where huge volume of illegal drugs emanate before these are distributed to other towns in the province.

In 2014, police also raided Purok Krislam where arrests were made and illegal drugs were seized. (PNA)
JOHN ANDREW G. TABUGOC/EDS